You are here: Home / Reviews / NERF Megalodon Review – Just what does this Mega Blaster think it is?

The NERF Megalodon is an intimidating looking spring-powered, 20 round, cylinder fed blaster in the Mega series.

The Megalodon seems to be something like an upgrade to the RotoFury blaster by packing double the firepower in a compact package.

However at first glance it is pretty hard to figure out what it is trying to be, so let’s check it out and see if things become any clearer! 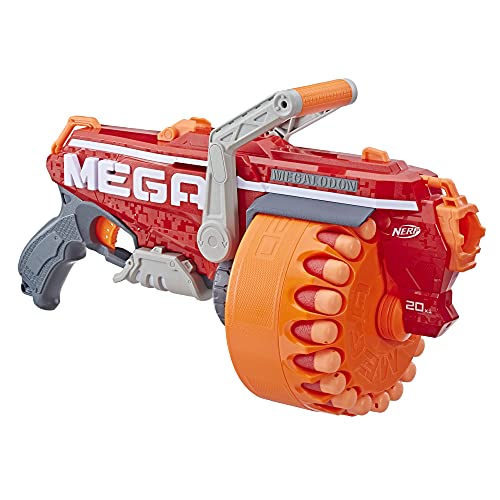 An unorthodox blaster, but one that is great fun and a potentially very interesting choice as a secondary blaster

Oh yeah, and it is wicked fun to shoot!

We’ll see how the Megalodon stacks up against other blasters in the mega-series. It has quite an intimidating appearance, but is its bite as big as its bark? Is the priming handle as fun to use as it looks? The answer to these questions and more coming up……

But first, what’s in the box?

Upon unboxing your blaster the cylinder is detached, but installing the cylinder is very simple. It simply snaps into place. Once installed it is not designed to be removed.

Aside from the massive cylinder, the other stand-out feature is a correspondingly massive top-mounted priming handle. The position of this handle ensures it is much easier to be fired from the hip rather than from the shoulder,

Below the priming handle, there are front and rear sights for a classic iron sight lineup. There are no tactical rails, but given the design of this particular blaster, there is also no space to attach any!

There are sling mounts above the barrel and at the rear of the blaster and there is a third sling mount beneath the handle.

There is no N-strike attachment lug on the muzzle of the Megalodon as with all blasters in the Mega series as these Mega darts simply don’t fit through N-Strike holes.

Like most cylinder blasters, the Megalodon is front-loading. Just slide a dart into each of the 20 empty slots. Make sure the darts are all facing the same direction with the orange tips facing forward.

To prime, pull back the handle, then push forward and you are ready to shoot. The prime weight is light, the rotating orange handle on the top of the primer makes resetting the handle smoother. The faster the reset, the faster you can reprime and shoot.

*The orange part of the priming handle rotates as you pull back on it to prime. This feature makes it a bit smoother and easier to rest the handle

The Megalodon is easy to load and fun to shoot. It has a spring-powered firing system, with darts firing at a rate of up to 85 FPS, which is pretty good for a Mega Blaster.

This blaster does feature slam-fire which great for lighting up your opponents when engaged in an epic battle. To enable slam-fire, hold down the trigger as you rapidly pull back and forth on the priming handle.

The dart is released when the priming handle is set back to the forward position. This is great fun chucking out a wall of those big Mega darts that always seem to hit with a satisfying “thud”! Do be aware that slam fire will see the muzzle velocity, and hence the range, drop as you fire more darts in a salvo.

Boasting double the firepower of the RotoFury, in a smaller package, and triple of the CycloneShock, the Megalodon would be an awesome upgrade to either blaster.

The Megalodon is pretty compact in comparison to its capacity. It also seems to be designed to be shot from the hip. You aren’t able to shoulder it or hold it like a pistol for a more accurate aim.

We love that there is the option to be tactical and sneak up on your opponent, firing one well-thought-out shot at a time. Or you could go haywire and blow all 20 darts in a frenzied attack in slam-fire mode.

Yes, the average FPS was a bit embarrassing, well below several other MEGA blasters, especially when using slam-fire, but it is designed to fire from the hip, so the range was never going to be a priority.

But it’s definitely fun to shoot and a good choice as a secondary blaster for NERF battles, especially if there are special MEGA rules like double hits for MEGA darts…