You are here: Home / Reviews / NERF Modulus Regulator Review – Full or Semi Auto at the flick of a switch

The Modulus Regulator is definitely an interesting blaster. Along with the various Modulus components, which allow you to swap between several configurations, it features select fire.

Select fire allows you to swap between auto, burst-fire, and semi-auto…something we have been crying out for!

So now we have got what we asked for…is it actually what we need? 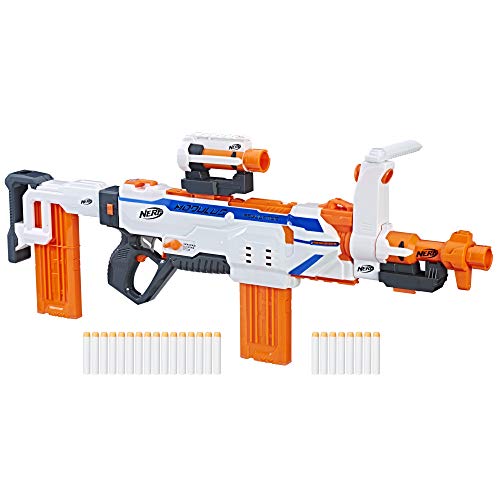 Being able to switch between semi-auto and auto is a very cool feature. Unfortunately, the overall blaster has some weird ergonomics that make me like it less than I should.

The NERF Modulus Regulator is a magazine-fed blaster that features a conveyor based system similar to the Hyperfire, but with a select-fire. This allows you to switch between semi-auto, three-round burst or full auto bad-boy mode!

Opening the box, you will find

Moving back along the top of the blaster, you will find the access door to clear any jams. To open this, just release the lock and lift. Once open, this exposes the feeding conveyor belt so you can get in there and clear any jams of malfunctions. this needs to be shut and locked for the blaster to fire again.

The grip itself is a bit smaller than the Elite or Modulus series norms but it’s smooth and comfortable. The trigger guard is also a littl ebit smaller than I would like and also features an additiona “thing” that we will go into in the loading section.

Further forward on the underside is the magazine well. This blaster is compatible with all N strike magazines. I found the position to be a touch too far forward compared to most NERF guns. So when I went to load I would find myself crashing around trying to find the slot more often than I would have liked.

The magazine release is in front of the trigger, within the trigger guard. This can be pressed by extending your trigger finger forward. I’m not a fan of having anything but the triggers inside the trigger guard, so it is also a little bit weird but it works.

Just in front of the trigger is the selector switch on both sides for both lefties and righties. This switch lets you move between semi-auto three-round burst.

The semi-automatic and three-round burst modes are electronically controlled to fire one or three darts with any duration of the trigger input. Full auto moves the feeding conveyor only when you hold the trigger, similar to the hyper fire.

Just behind the rear sling attachment point is the empty chamber indicator. This is a little red light that blinks for about 15 seconds when you pull the trigger when you have run out of ammo. It is a bit unnecessary (you know when you are out as it stops firing!) and there’s no way to stop it other than loading in a fresh mag. This is especially annoying if you are playing in the dark!!

Below the trigger is the rev trigger. As with all flywheel blasters, you need to hold it for a moment before pulling the primary trigger to fire.

Firing the Regulator is similar to other flywheel blasters – hold the rev trigger for a moment and pull down the primary trigger. The only difference is that you need to select the mode…

With the selector, the regulator is really good fun to fire! It could do with larger mags than those supplied, but it fired hard enough and fast enough for an N-Strike blaster. The firing velocity is on par with the rest of the Elite of about 70 feet per second and the trigger response time is as expected from an electronic feeding mechanism like this

For those that are interested, there appears to be a sensor in front of the flywheel mech that detects if a dart has been fired. As I mentioned the semi and burst modes are electronically controlled so they will complete their cycles with any amount of trigger input and this sensor makes this possible as a misfire would screw up if it was just timed

The one issue I did find was that the conveyor belt slipped off its tracks a few times. This lead to changes in the rate of fire as the conveyor feeding system was not consistently pushing darts into the flywheels. I’m not sure if I have a lemon or if this is a design or production issue but it’s worth noting

The Regulator comes with a range of attachments. We’ll start with the storage stock.

This attaches like any other stock but it holds a magazine on the back, which is pretty useful. In the top, it also stores the carry handle attachment. This is probably more useful when you are storing the blaster and don’t want to lose the bits that when you are playing, but useful.

The stock is a little short for me, but I am a full-grown adult and it is about the same length as the other N-Strike stocks

We have already mentioned the carry handle barrel. This features a male and a female attachment point so you can attach that in between any other barrel combination you could possibly want. The top of the handle pivots and clicks into place every 90 degrees so if you want to shoot from the hip, you just turn it to the side and let rip!

There is also a little peephole in the top of the carry handle to allow the included sights to have a line of sight so when you attach these other optics you can look through it. The alignment is a little high though so if you have a normal optic on the blaster your line of sight is going to be blocked.

Overall I think the regulator is pretty darn cool! The select-fire feature is what I’ve been most excited about as it combines the reasonable use of ammo from semi-auto with the stomping power of full-auto plus a three-round burst to mix things up. It works pretty well, and with any luck, this will be implemented in future blasters.

I am less fond of the blaster shell itself, though. The ergonomics and layout are just irregular and kind of weird; the magazine release isn’t especially comfortable, and I really just don’t like anything being in the trigger guard other than the trigger

The selector switch location also feels just out of place. Normally the selector switch or safety is used with your thumb but I could only reach it with my trigger finger. I guess they did this so you weren’t trying to fire as you flicked the switch.

Also, the mag well is in kind of a weird position in relation to the grip, which makes changing the magazine in a rush is also slightly hit or miss. This might be just a case of getting used to it, but it was another case of making me not quite like it as much as I wanted to.

The grip is a little smaller than the nerf norm, added to the trigger guard, which is also small, and then adding in the mag release button there, and it all feels very tight indeed.

Finally, there is the question of price – is it worth it? This really comes down to whether you want these accessories and how much you like the quirky layout of the blaster and ergonomics.