You are here: Home / Reviews / NERF Modulus Tri-Strike Review – Is this 3 in 1 Blaster worth your money?

This gives the Tri-Strike gives you three ways to fire: as a standard Elite blaster, as a missile launcher and it has the Mega dart barrel extension. That sounds great and a lot of fun, but how does that the Tri-Strike actually perform? And what about the rest of the blaster’s design?

In this detailed review, we’re going to examine the Tri-Strike up close and explain what it really has to offer. We’ll take a look at the pros and cons and judge its overall performance and if it’s worth buying. 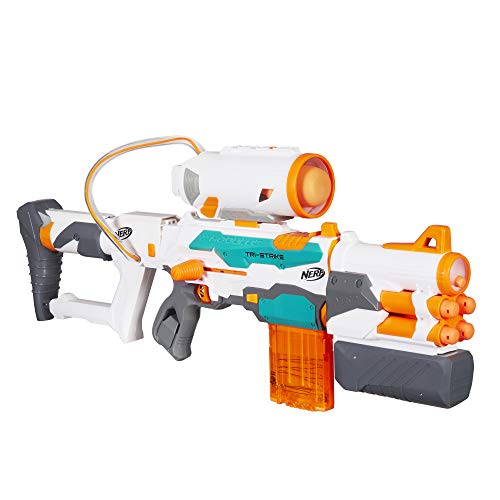 Much more fun than the basic numbers would suggest!

The Modulus Tri-Strike blaster is a spring powered magazine-fed blaster in the modulus line which has some cool modular attachments
The tri strike features three three ammo types – a Mega attachment, a missile attachment, and of course, it shoots the normal Elite darts as well.

So let’s get into the box

In the box, you will find

The cool thing is that these components are not tied to this blaster, they can be used on other shells, to create modular blasters. This is a good move!

Since these three components can be used individually, together or on other blasters I will go through each separately starting with…

When you remove the attachments the core blaster is quite a dull spring-powered blaster. To make matters worse, they have decided to stretch it out a bit to make the overall thing look bigger, but this means the magazine well’s location is way too far forward.

NERF has been making blasters long enough and with most blasters, you can easily hit the mag release with your trigger finger. However, unless you have fingers that a virtuoso piano player would be jealous of, you won’t be able to reach without removing your hand from the grip.

In this, it is reminiscent of a shrunken Longstrike. Yes, you can use your off thumb and just strike it back as you’re grabbing the mag but NERF has made enough of these things to know how to design these things properly and this just feels lazy.

The Tri-Strike comes with a 10 round magazine, but you can easily use any of the standard N-Strike magazines for a bit more capacity.

The Tri-Strike is a spring power blaster so to prime it, pull back on the handle and push forward. You can then pull the trigger to fire or, hold the trigger down and slam-fire with each priming action

On the top, towards the front is the access door if you experience a jam. So if you have any issues, you just pull back the priming handle, flick back the access door and clear it out with your finger. It should be noted that this type of blaster is usually pretty reliable and I never had any need to use this in action

At the back is the stock attachment point where you can attach any N-Strike compatible stock, but you will probably want to attach the stock with the priming handle for the missile or that won’t work (just a suggestion!)

The grip is pretty good for the N-Strike line and feels comfortable, although with the stock attached it is a little cramped. This also feels like another thing NERF could have done better as it did not need to be this tight.

The trigger is what you would expect from a spring-powered blaster – nice and positive. I mentioned before that the magazine well is too far forward, but when you hit the release it all works smoothly, as does reloading.

When you fire, the performance is also a touch disappointing – it is a bit down compared to other N-Strike blasters, which really noticed in Slam Fire.

Overall the core blaster is a bit disappointing, but let’s see what the other components have to offer…

The Tri-Strike front barrel attachment slots on to any N-Strike barrel attachment point, so you can use it with any blaster that has this. This then gives you 4 MEGA darts up here. Firing these is not like a spring-powered blaster, instead, you push out the handle and then pull it back sharply and that fires it.

The velocity depends on how hard you can actually pull back the handle, but it is typically only about 40-45 fps, so you will not get much range. So if you do not pull it back hard, it will barely move. The attachment only fires one at a time, it doesn’t shotgun.

If you are familiar with them, it functions in a very similar way to the Thunderblast or the Demolisher missile launcher.

The attachment itself does have a small internal barrel like the Retaliator front barrel extension which I find really pointless as they usually just slow down the speed of the darts. They could just leave that hollowed out, but then I guess you would not be able to add yet more barrel extensions then…

So the Mega darts aren’t big enough? Well, may I tempt you with a giant missile thing?

The way this works is similar to the front barrel, except this time you use the stock as the handle to pump the firing mechanism. You pull it back as far as it will go, then snap it forward and away your missile goes… The performance is entirely based on how quickly you can move the handle.

The really cool thing is that the missile launcher has an N-Strike stock attachment point, so you can turn this into a standalone blaster if you need a missile for something in your game…cool!

On a practical note, the stock is a decent size and shape too, so it is comfortable to shoulder.

The core blaster is pretty tame. It is down on power with some weird ergonomics, but I cannot really blame NERF too much for keeping the price down here and spending it on the accessories as this what the Modulus line is all about.

So while the performance of the attachments is not great, they make great back-ups and tactical tools of you are playing a version of the game with extra points for hitting someone with a Mega dart os you need a missile to destroy a base.

Even better is that these attachments can be used on a wide range of blasters, so you can add these into your EAT or Stryfe for a much better core blaster. If NERF had included one of these the price would have been way too high. So this is a good balance between getting the components out there, price and functionality….although you can always scour eBay for them!

So overall, much more fun that the numbers would suggest and a great way to customize your other NERF blasters