You are here: Home / Reviews / NERF Disruptor Review – Is This N-Strike Elite Blaster The Real Deal? 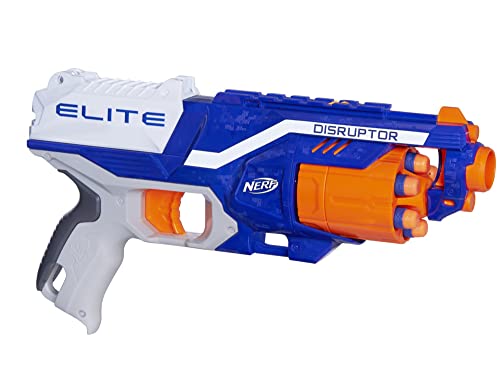 The NERF Disruptor was released in winter of 2016 as part of the N-Strike Elite series. It is a 6 shot revolver style sidearm and bears more than a passing resemblance to the hugely popular Strongarm but without the drop cylinder, instead using a front loading design.

The big question is, does this change make it a better proposition than the Strongarm or is it just a cost saving exercise by Hasbro?

The NERF Disruptor is essentially a Strongarm but with a front loading mechanism and that is no bad thing.

Easy to holster, with slamfire and easy loading makes the Disruptor a solid choice as a secondary blaster.

Quite clearly this has been introduced as an update to the Strongarm, but while some updated blasters are head and shoulders better than their predecessor, the Disruptor only makes a few, small changes to the tried and tested formula.

The Disruptor’s mechanism is pretty much identical to the Strongarm, apart from a small change to the trigger. It is so similar in fact that the Strongarm upgrade kit from Orange Modworks is reputed to work perfectly on the Disruptor, bar some filing down some areas of the trigger mechanism. The Rebelle Spylight also uses this mechanism and it works well, so we can understand why there was not much need for any changes here.

It has the same orange and blue color combo as the other Elite blasters, and a slightly more streamlined style to the Strongarm, which makes it slightly easier to holster and draw.

The Disruptor epitomizes the sidearm blaster; compact enough that it can be holstered but not so small that you cannot hold it comfortably, lightweight and easy to operate. You can hold and fire the Disruptor with one hand, but you will need your other hand to prime the next round or another Disruptor – that little extension on the butt of the grip is designed to hook into the priming handle so you can prime one Disruptor with another allowing you to dual wield…cool!

The internals are similar to other NERF secondary blasters, and has the same smooth operation. It has a powerful trigger but doesn’t have any recoil that will affect your hold.

The Disruptor has a sling mount, but it is an opening in the handle rather than at the rear. The unusual sling may take some getting used to, but it’s not a major concern.

There is also a hook which you can use to fit another Disruptor’s priming slide grooves. This is a useful feature in case you want to wield dual Disruptors and prime them at the same time. With the hook, you can prime both without putting one down.

The Disruptor uses a spring fire mechanism, which rotates the turret as it is primed, making it much less prone to jams that the earlier mechanisms which rotated the turret as the trigger was pulled. This is a much more reliable mechanism and a vast improvement over the likes of the Maverick.

Like most other NERF spring blasters, the firing mechanism allows for regular and Slam Fire mode. If you pull the trigger once, you fire a dart. To use Slam Fire mode, simply hold the trigger down and repeatedly pull the slide. Both accuracy and range will diminish using slam mode, but it is still very cool to have as an option.

With the front loading design, we found it took us just under ten seconds to reload, slightly faster than the Strongarm. In the thick of the action, it was even better as to put even a single dart into the Strongarm you need to drop out the cylinder, whereas the Disruptor lets you put a dart in and be ready to fire much faster – a real lifesaver in a tight spot.

The biggest issue with loading is ensuring you push the darts in the right amount when loading – too much and they can jam, too little and they can come out or foul the mechanism although, in reality, these issues are rarely a problem.

The rotating drum holds 6 darts, which is typical for most sidearm blasters, but it’s not going to last if you go with Slam Fire mode.

The Disruptor gave us an average muzzle velocity of 72 feet per second, which is about average for the N-STRIKE ELITE range, but better that most blasters. This means that if you angle the barrel up to give the darts a good arc, you can get somewhere close to the claimed 90ft/27m, but usually, you will be lucky to make it to 80ft without modification.

If you fire it flat, the useful range drops to around 50ft/15m, but since the NERF darts aren’t that great aerodynamically, this is about as far as you can expect to hit anything human sized anyway!

The Disruptor has a comfortable grip and fits nicely in your hand. The trigger has a really good feel and priming slide is well positioned so even in Slam Fire mode you still have a good amount of control, so your accuracy is not affected too badly.

There is a tactical rail included, for those of you that like your scopes and gizmos and a couple of sling mounts, one on the butt of the grip and the other, unusually, in front of the trigger guard. This looks like a reaction to the comments about the Strongarm having its’ sling mount on the priming slide, which was commented on by people saying it should be on something more stable, but realistically you are more likely to have this holstered than slung, but still a nice option.

There are a lot of quality sidearm blasters from NERF, but we can say without hesitation that the Disruptor is one of the better ones they have.

If you’re looking for a weapon to complement your primary blaster, this is one you need to take a good look at.