The NERF Rival Hypnos shares a lot of functionality with the Apollo as both are spring-powered, magazine-fed Rival blasters.

So, is this just a re-modeled Apollo or does it have more to offer? How does it stack up against the hopper-fed Artemis, one of our most highly rated blasters? 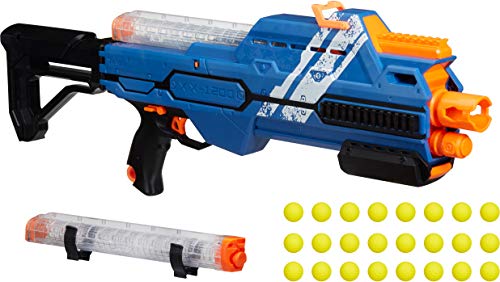 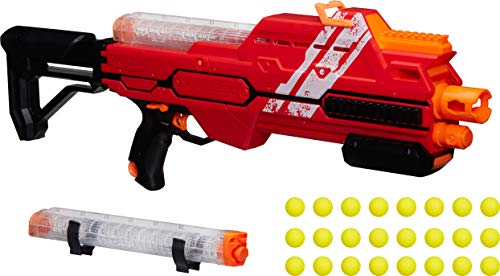 We like this blaster as an upgrade to the Apollo, as it addresses many of the its shortcomings with much better priming action, and a stock.

So, a new spring-powered Rival Blaster. So far, these have been a little disappointing, so let’s see if the Hypnos can improve things.

We will take a look at how that funky stock works (or doesn’t!) how easy it is to load and look at how well it functions and fires (of course!) compared with the other spring-powered blasters in the Rival series.

So with that, let’s see what you get in the box…

Picking up the Hypnos, the grip is similar to all blasters in the Rival series, big and comfortable to grip, but a younger or smaller person shouldn’t have an issue using it either. There is one sling mount located on the bottom of the grip.

The Hypnos also has a foldable stock, which is a decent length when locked into place and makes the blaster much more compact when stowed. The stock doesn’t interfere with the ergonomics of the blaster when folded – it is a pretty darn nice addition!

To unfold the stock, simply press the orange button located on the left side of the stock. It swivels over to the right side of your blaster and locks into place. To unlock the stock simply pull back on the stock and snap it back into place.

At the front of the blaster, the Hypnos has no N-Strike attachment point as you would expect for a Rival blaster, so you are unable to attach a barrel extension.

Above the muzzle is a tactical rail, and there is also a second rail on the right side of the blaster.

Underneath the muzzle is the priming handle. To prime just grip the handle and pull back. There is a small hole in the side of the shell, this is the priming indicator.

Included are two 12 round mags. To load simply snap the magazine to place. To release, pull down on the mag release located on the back left side of the blaster.

The two clips attached to the tactical rail hold the second magazine for fast and easy reloading.

The Hypnos is also compatible with the shorter Apollo mag, which could come in handy for a few extra shots if you’ve already spent your other two 12 round magazines.

The Hypos comes with two 12 round magazines and 24 high impact rounds. To load, the Rival rounds must be individually inserted into the magazine. Once the magazine is full, simply snap it into place.

To reload, pull back on the mag release button, remove the empty magazine, and replace it with a full one. The magazine well is spring-loaded, so when you pull down on the mag release, it ejects out slightly which makes your reload a bit smoother and easier.

The magazine release is only from the left-hand side, making it easier to operate for a right-handed shooter. This means you’re able to pull down on the release and reload without having to take your hand off of the grip for a pretty quick reload.

A left-handed person would have to break the grip to reach over and release costing precious moments of firing time.

The Hypnos does not have slam fire, so to fire, pull back on the black priming handle located just beneath the muzzle and pull the trigger. Since there is no slam fire, the blaster must be primed before each shot.

Although I personally didn’t experience any jams or malfunctions, on the left side of the blaster, you’ll find the access door to clear any jams.

Once you have cleared the jam, to the front of the trigger on the left-hand side, you’ll find the unjamming button. This button allows you to reprime after you’ve already primed to clear out any jam or malfunction.

I got it to fire high impact rounds at around 90 FPS, which is about par for the course for a Rival springer.

Do be aware, that if you don’t completely pull back on the priming handle you are more likely to get inconsistent firing when a round does not load into the chamber properly.

This can cause the FPS to drastically drop to 35 FPS if you aren’t vigilant with proper priming. I had no issues when shooting at a slow, steady pace, but it was when I was trying to fire rapidly that I had these issues with consistency.

We like this blaster as an upgrade to the Apollo, as it addresses many of the Apollo’s shortcomings. We also like the folding stock on the Hypnos, it definitely makes a difference when maneuvering around tight spaces, while able to extend it when you want that extra bit of stability.

When fully primed and functioning properly, the Hypnos fired at an average of 91 FPS, making it comparable to other spring powered Rival blasters.

We found the two 12 round mags fairly easy to load, release and reload using the spring action mag release button. However, you may be at a slight disadvantage if you are a left-handed shooter.

The biggest problem was the Hypnos is also prone to misfiring or short firing too easily. This can be detrimental when engaged in battle and you want to quickly unload on your opponent.

This blaster is a great option for those looking to upgrade to more rounds per magazine from the 7 round Apollo, or if you looking for something a bit, well, better than the Atlas.

However, it does not have slamfire and, due to the frequency of misfires and short fires. I wouldn’t recommend it as a primary blaster.