This is our review of the NERF Rival Khaos, a fully automatic and it has a massive 40 round magazine and it shoots NERF Rival high impact rounds rather than the more common NERF Elite darts.

This is no bad thing though as the Rival range is aimed at the 14+ age range so these rounds fire faster, around 100FPS rather than the usual 70FPS for Elite blasters, and much more accurately.

As with all the NERF Rival blasters, it comes in 2 colors, red or blue, so take your pick (or see which one is cheaper and buy that!) 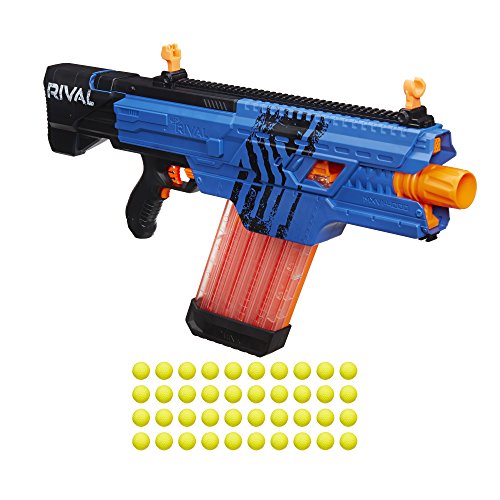 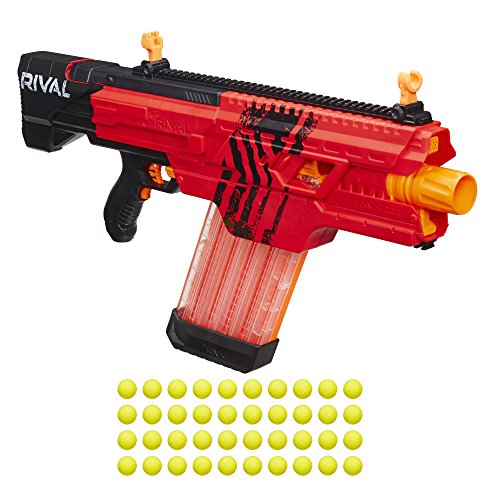 Currently, this is the full auto in the NERF Rival range, which makes it a great bit of kit.

Everything about the Rival Khaos MXVI-4000 screams big and powerful; full auto and mag-fed with a capacity of 40 rounds. It sounds like this is going to be the ultimate primary blaster. However, weighing in at almost 6 lbs, the big questions I had were, how big and unwieldy is it and how hard is it to carry those magazines?

Finally, the Rival Khaos MXVI-4000 was the big hitter in the Rival range, then the Rival Nemesis showed up. The Nemesis is more expensive so is the Khaos better value as they share the same firing mechanism?

To get things moving you need to insert the 6 “D” batteries or Rechargeable Battery Pack. The cover for this is on the top, secured by one screw. Remove and you can take off the plate and slide in your power supply. Now you are ready to go.

When I picked up the Khaos I found the grip nice and comfortable. I am over 6′ tall and because the Rival blasters are targeting a slightly older market, I find they fit me better than most N-Strike Elite blasters. It is also pretty well balanced if a little weighty.

The one thing I would like is a slightly longer stock. The Zeus was better for me in this respect, but the Khaos still sits against my shoulder OK.

I would like to be able to add a stock, but there is currently no way to do this without some hefty mods.

Looking over the rest of the blaster, there is a pair of flip-up sights on the top to give you the usual circle in the back and stick in the front. You just line the two up and you pull the trigger. I don’t find these very much use, especially for a full-auto. Just pull the trigger and throw foam balls over everything!

The barrel does not take any N-Strike attachments as the Rival ammo is larger so they simply will not fit through. The blaster also has a long tac-rail up on the top but this is also not an N-Strike NERF rail either. The reason for this is puzzling, but you can put your NERF attachments on there, but it is not an easy fit. There is also another rail under the barrel if you want to add a grip or torch.

On the side is the access door that gives you access to the flywheels to clear any jams.

To release the, rather large, magazine you just press the mag release button that they have conveniently added on each side so it works for lefties as well as righties. Once you have taken it out you soon realize the Khaos magazine is quite a piece of engineering.

It essentially contains four 10-round magazines in one. Each of these has its own tensioner to push the balls up into the loading mechanism. As you can probably imagine, loading the Khaos magazine is not as simple as the Elite stick mags.

First, you have to take off the top, which hinges over. Then pull down on the four slides that provide the tension to push the rounds into the loading mechanism. Once you have done this you can load your balls into the four tubes in the magazine. Once this is done you can release the tensioners. Careful how you do this as I managed to let it spring back and spew all 40 rounds over the floor!

Finally, pivot back the top and release all of the little buttons….you can now load it up, but make sure you don’t mess up or the spring loading will ping all your ammo over the floor…again!

Jangular did come up with this workaround using the Zeus magazines, not idea but it is much faster from his evidence (I cannot say I have tried it though)

The loading is even more of an issue as currently, NERF does not sell the magazines for the Khaos separately so you have no option but to reload.

Once you have loaded the magazine, the slot itself is large but you have to line up a few different notches and grooves. I’m sure you can get slick with this, but I still fumble it more often than not. With a magazine this size, it is a little bit more cumbersome and far more fiddly than other magazines.

This is a flywheel blaster, so there is a second trigger on the grip to power up the flywheels. Please note there is also a safety catch that stops this trigger working….I didn’t notice this and was swearing away thinking I had bought a dud! Once the flywheels are up and running you can squeeze the trigger and unleash all 40 rounds of foam fury!!

The firing mechanism is similar to the Hyperfire in that it uses a conveyor belt system to deliver the darts to the flywheels rather than a pusher arm like most other NERF blasters. This means that when you pull the trigger the conveyor belt hooks up to the top four balls in the mag and moves them towards the flywheel, which is a clever way of taking these different mag ports all at once rather than the single stream of every other NERF blaster.

Unlike the Hyperfire, I found it did not jam as much, but it did still suffer from the slight pause after you pull the trigger before anything came out of the barrel. Apart from the slight delay as it transports the first ball down to the flywheels, when you pull the trigger it feels like pretty much any other full-auto blaster – short squeeze and you fire one or two rounds, hold it down and you get a string of darts.

The accuracy is the biggest draw of the Rival range for me. With Elite darts you are lucky to hit a human-sized target at 20m with any sort of regularity, the darts are simply not consistent enough. The Rival balls have golf-ball like pimples on them, which makes them much better aerodynamically and the additional power makes them so much more consistently accurate than the N-Strike blasters.

For blasters that fire about 50% faster than Elite blasters, you would expect the range to be far longer. However, this is not the case. The balls are smaller and lighter and seem to run out of steam, so barely have any better range than the Elites.

However the good thing about the Khaos is that it fires with almost as much power as the spring-powered Apollo, mine chalked up an average of a tiny bit over 100FPS, just down from the Apollo’s 102 FPS. This is great as the other flywheel Rival, the Zeus, was noticeably down on muzzle velocity compared to the Apollo.

The extra velocity, while it does not really help with the range, does make it much harder for your target to dodge you. If people are used to being shot at with Elite darts, it is quite funny to watch them try the same moves and get hit up the backside before they have even got to move a muscle!!

I was also very impressed with the auto-fire results – usually when you hold down the trigger in full-auto the range and speed drops as the flywheel cannot keep up. With the Khaos it kept firing at high velocities. It did have a few stutters when the conveyor belt did not deliver a round to the flywheels in time, but it kept up a pretty consistent, and high, rate of fire.

So, The Rival Khaos MXVI-4000 is definitely a really fun blaster. Featuring high-capacity magazines and full auto with the Rival accuracy, it is great fun. However, there are some issues.

The biggest issue is the magazines. While they are an engineering masterpiece, and give you that fantastic capacity, they are also big and difficult to carry around with you (although easier than drums!) By the time I write this there may be some good solutions for carrying these mags around on you, but right now it is a backpack or nothing.

They are also really fiddly to load and even slotting them into the mag-well is not as slick as other blasters. This makes what should be a big advantage a bit of a liability in many NERF war situations.

It is big and heavy and this does make it tiring to carry around with no sling. This means the Khaos is great for defending bases but limits its usefulness in the open.

On a practical note, it’s more pricey than most blasters and you really need to add the rechargeable battery pack as this costs as much as about 4 sets of batteries, which is a bit of a no-brainer. This does still push the price up further and the Rival rounds are more expensive too.

But if you want some heavy-duty firepower and cannot wait for the Nemesis, this is, with the possible exception of the Mastodon, the meanest monster blaster on the market today!