The Perses is a hopper-fed, medium-sized, flywheel and conveyor-powered blaster in the Rival range. It is smaller than the Nemesis or Prometheus, making it more tactical and easier to maneuver around corners or in tight spaces – basically the NERF Rival submachine gun!

However, this smaller size means it has half the ammo of the Nemesis and a quarter that of the Prometheus and a ridiculous 8 rounds per second rate of fire…will this be an issue? 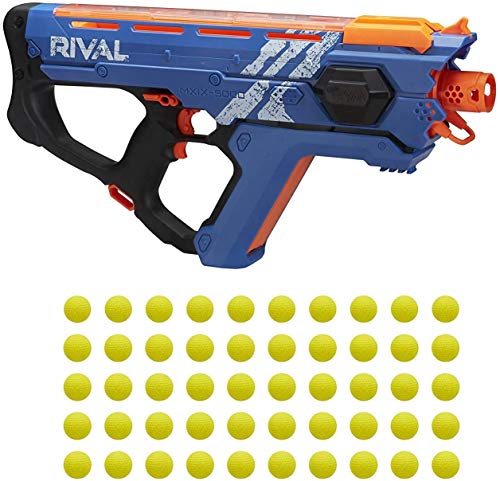 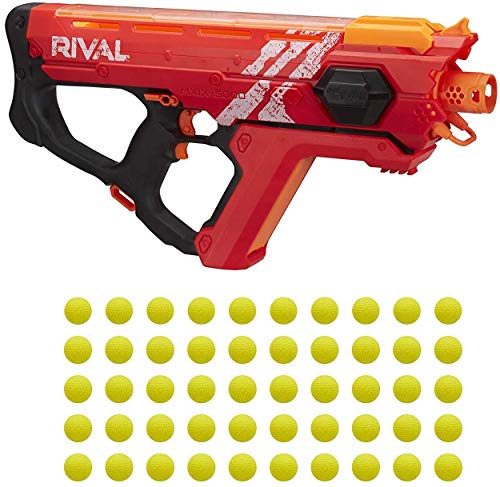 The Perses is an excellent blaster, but its biggest strength, the rate of fire, becomes its biggest weakness as you can shoot all 50 rounds in under ten seconds!

The Nemesis is still my fave, but this is close!

The NERF Rival Perses is the latest fully-automatic addition to the NERF Rival series. Smaller and more maneuverable than the bulky, Prometheus and Nemesis can the Perses pack enough power in this smaller package to unseat the King?

Let’s unpack it and get stuck in

Taking the Perses out of the box, and starting at the front, it has a front-mounted sling point under the muzzle. There are two sling points, this one just below the barrel, and the other underneath the trigger grip

Behind that is a really small tactical rail, it might take a grip, but not a lot else

Along the top is the hopper door to load the Perses and at the front is the jam door. To open the jam door you push down the button then you push forward rather than opening it from the side the way you do on most.

Once open there is not a lot of space to get in and free up and jammed ammo, so it is lucky that I had few problems with jamming while using this blaster! To close, you just slide it shut.

Behind this is the hopper door. The Perses has a long narrow top-loading hopper and the hopper door opens along almost its entire length. I will get into loading later.

On the left-hand side of the shell, you’ll find the hopper release button which you can pull back to discharge the hopper. This is designed to allow you to check for any malfunctions with the feeding conveyor.

Once the hopper is removed you will see the feeding mechanism in the bottom. You will also see the flywheel and conveyor belt, the same as with Prometheus and Nemesis blasters. This button seems to be very prominent and likely to get knocked, which could see you unable to fire at just the wrong time!

Moving to the trigger, this blaster has a safety, just like other Rival blasters. When you pull it down you can’t rev or pull the trigger. Just push it up enable the blaster again. You can reach the safety from both the right side and the left side for right or left-handed shooters.

The grip is similar to other Rival blasters on the market and designed for older humans, so I found it very comfortable. The hole stock design is a matter of taste and for blasters like the Hyperfire, I really hate it because it just cramps up my hand and I cannot use it properly. However, being designed for 14+ means they have left enough room to get an adult hand in so I don’t have that issue.

Finally, the stock, which is pretty short, but not uncomfortable. You feel a little more cramped up than you do with a Nemesis, but it is fine to shoulder. NERF is obviously trying to create a very compact blaster and this is a good trade-off, it feels similar to the Zeus in size and does feel small. Oddly, when you put this next to a Nemesis it’s only a little bit smaller shorter, but when you shoulder it you really feel how small it really is

The Perses is also noticeably lighter than the Nemesis, so it works perfectly for close-quarter combat rather than running around in the park. The Perses much easier blaster to fling around a doorframe than something like the Nemesis and definitely better than the Prometheus.

The Perses is also lightweight in comparison to other blasters. This is because it comes with a newly introduced lightweight rechargeable battery pack. The rechargeable battery is not compatible with any other Rival battery packs (unlike the one used in the Nemesis and Khaos) at this time. However, it is noticeably smaller and lighter than the one for the Nemesis and the Prometheus and miles better than those that require 6 D batteries.

This rechargeable battery pack is included with the blaster which makes the price, when compared to the Nemesis and separate battery pack, much more palatable

The guard in front of the grip houses the battery. This design is pretty unique because you don’t need a screwdriver. Instead, there’s a little button at the bottom, which is designed so you have to push the little circle and then pull on the little slide back to unlock it. This stops you accidentally opening it is designed very well and I did not get it to come open, even with a fair amount of abuse!

This mechanism also means you don’t need to carry a screwdriver, so it’s pretty secure and quick access if you need to pull it out quick. This new, smaller battery pack held enough charge that I did not run out during a session. So I’m crossing my fingers that Hasbro implements this rechargeable pack into future flywheel rival blasters

Inside the blaster is a little spring that ejects the battery. To reinstall it you can just push it up into the slot and click it in.

I am a big fan of NERF moving in the direction of these battery packs, but I do wish they would standardize them more so you can swap them between blasters. Hopefully, NERF will use it for other blasters in the future.

The Perses hopper holds 50 rounds, although when you first see it you don’t believe it can hold that many. To load, simply unsnap the long narrow door and pour in the ammo.

The Perses is much easier and faster to load than a traditional magazine, as you are able to load handfuls of rounds at a time versus darts that you have to feed into the magazine one by one.

However, the problem I find is that the whole top hinges open, but for a right-handed person, it hinges the wrong way. I may just be very awkward and do it the wrong way, but I found I had to let go of the grip with my right hnd, hold it with my left and then load with my right. This was a pain in a NERF war as it meant lots of changing hands before I could fire again.

The other issue is that if you tilt the blaster (as I also did…did I mention, I am awkward!) you find the ammo falling out all over the floor…and being ball-shaped, they run away!

I would much rather have them create a slightly wider opening at one end or the other, rather than the long, thin one it currently has.

I get the feeling that there will soon be some mod-kits to fix this and increase the ammo supply, which will make this blaster so much better!

Being a flywheel blaster, you’ll have to hold down the acceleration button to power up the motor then pull the trigger to fire. This blaster has trigger locks on both sides to prevent accidental firing. When the safety is on you are unable to rev or pull the trigger, push up to release and engage firing capability.

The Perses is fully automatic with no semi-auto option, so you’ll have to exercise a bit of self-control if you don’t want to blow your entire load in a matter of seconds.

When fully charged and fully loaded, the Perses fires at a speed of 8 rounds and 100 feet per second.

Like the Nemesis, when the blaster is low on ammo it will fire slower as there will be bigger gaps on the conveyor. You very quickly develop the habit with these conveyor blasters of just tilting or shaking them to ensure the balls reach the conveyor faster for more effective shooting.

The Perses is a great blaster. It is lightweight and easy to maneuver due to its short stock and rechargeable battery, with immense firepower. It’s smaller size makes it perfect for when you need to move rapidly between targets or barriers.

But a blaster with this rate of fire needs a larger capacity or a semi-auto option. It is way too easy to run out of ammo with this thing.

The Nemesis ironically fires slower and has more ammo so it will take 2.5 to 3 times longer if you hold down the trigger before it runs out of ammo. I don’t find the rate of fire of the Nemesis too slow as you only need to hit your target once. With a faster rate of fire you don’t get time to adjust the trajectory before you have shot off half a dozen rounds!

If you like to be the heavy gunner, this would make an utterly awesome secondary weapon – sling this on your back and if you find yourself with a lot of targets, you could seriously rain down with a hailstorm of foam on them!