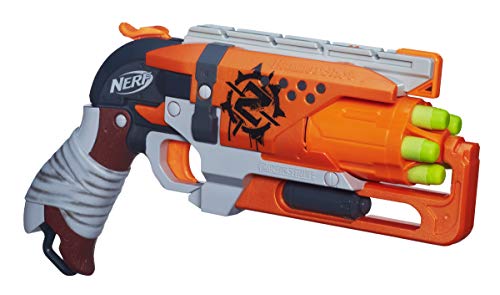 The NERF Zombie Strike Hammershot Blaster is one of the many NERF secondary sidearm blasters available, but what makes it stand out (apart from the bright orange paint-scheme and zombified detailing!) is that it is a real one-handed sidearm as it can be primed one handed.

Having a NERF sidearm you can fire with one hand is great, but what about the handling, accuracy and range and are five darts enough for a secondary blaster?

Compact size, front loading and one-handed priming make the Hammershot ideal as a secondary blaster or for dual wielding.

The only drawbacks are the 5 shot cylinder and the mouldings on the grip which can be uncomfortable, otherwise, this is an excellent secondary blaster.

The Zombie Strike range initially struck me as something like the Star Wars blasters – just there to make an extra buck by re-bodying existing blasters and usually making them worse. However, the likes of the Flip Fury, Doominator and this Hammershot have changed my mind.

Originally rumored to be NERF’s cowboy range, the success of shows like the Walking Dead saw Hasbro shift focus to the Zombie genre.

This has lead to several really cool blasters, that while they look gimmicky, are actually great fun and surprisingly practical.

The Hammershot looks like a typical NERF revolver albeit in orange with the Z logo and faux wood handle help maintain its Zombie Strike appearance. This is designed to make it look more distressed and Walking Dead like and, apart from the very bad wood color, it is pretty successful.

Other design flourishes include the stabilizer bar and capsule-shaped thing (no idea what it is supposed to be though) mounted under the barrel. Neither of these seems to do anything that I can fathom but add to the rugged looks.

On a more practical note, it has a sling/lanyard point on the base of the grip, like many other pistols, and a tactical rail at the top to add sights or ammo holders.

Loading the Hammershot is simply a matter of feeding the darts into the turret. You can reach each chamber from the front, but it can be faster and easier to rotate the bottom two out as this makes access easier. The biggest issue with loading is the typical revolver issue of ensuring you push the darts in the right amount – too much and they can jam, too little and they can come out or foul the mechanism although, in reality, these issues are rarely a problem.

Once loaded you prime it by pulling the hammer down rather than by sliding back the priming handle. If you do it one-handed this is surprisingly heavy the first few times you do it, but soon becomes easy, although I have fairly large hands and this is much harder for smaller hands to do! 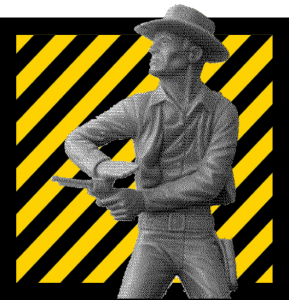 There is no slam-fire, but you can fan-fire if you hold the trigger and fan the priming hammer. With this, you can achieve pretty much the same effect as slam fire with a bit of practice, although expect your first few attempts to be comical if I am anything to go by… Keep in mind you only have 5 shots before needing a reload, so this is not always the best use of your ammo either.

The Hammershot uses a spring fire mechanism, which rotates the turret as it is primed, rather than as the trigger is pulled, making it much less prone to jams and a much better trigger action than the earlier mechanisms. This was first seen in the Strongarm and now seems to be in pretty much all the revolver designs by NERF.

The Hammershot gave an average muzzle velocity of a little over 73 feet per second, which is a little better than the N-STRIKE ELITE average. We also found that the Hammershot manage a slightly better average range than both the Disruptor and the Strongarm but not by enough to make any difference in combat.

This means that if you angle the barrel up to give the darts a good arc, you can get somewhere close to the N-STRIKE ELITE claimed 90ft/27m, but usually, you will be lucky to make it to 80ft without modification.

If you fire it flat, the useful range drops to around 50ft/15m, but since the NERF darts aren’t that accurate anyway, it is hard to hit anything human-sized at more than about 10m anyway.

The Hammershot fits nicely in your hand and the grip is large enough for my hands but some people didn’t like the feel of the rag/bandage molding on the grip. The trigger has a really good feel when you squeeze off shots and the priming hammer is well positioned to allow you to prime it one-handed. If you fan-fire you will lose a lot of control, so while it looks cool your accuracy is not going to be great.

There is a tactical rail included, for those of you that like your scopes and gizmos and a sling mount on the butt of the grip.

There are a lot of quality sidearm blasters from NERF, but this is our favorite spring firing sidearm. While the Strongarm and Disruptor have an extra dart in the cylinder they are not capable of being fired one-handed and for us, this is the where the Hammershot wins.

The only other sidearm we prefer is the flywheel/battery-powered Stryfe but only if your primary is a springer. If your Primary weapon is a flywheel blaster, then we would recommend this without hesitation.