You are here: Home / Archives for The Best NERF Rival Guns – What are Rival Blasters and What Are Our Top Picks?

The Best NERF Rival Guns - What are Rival Blasters and Our Top Picks? 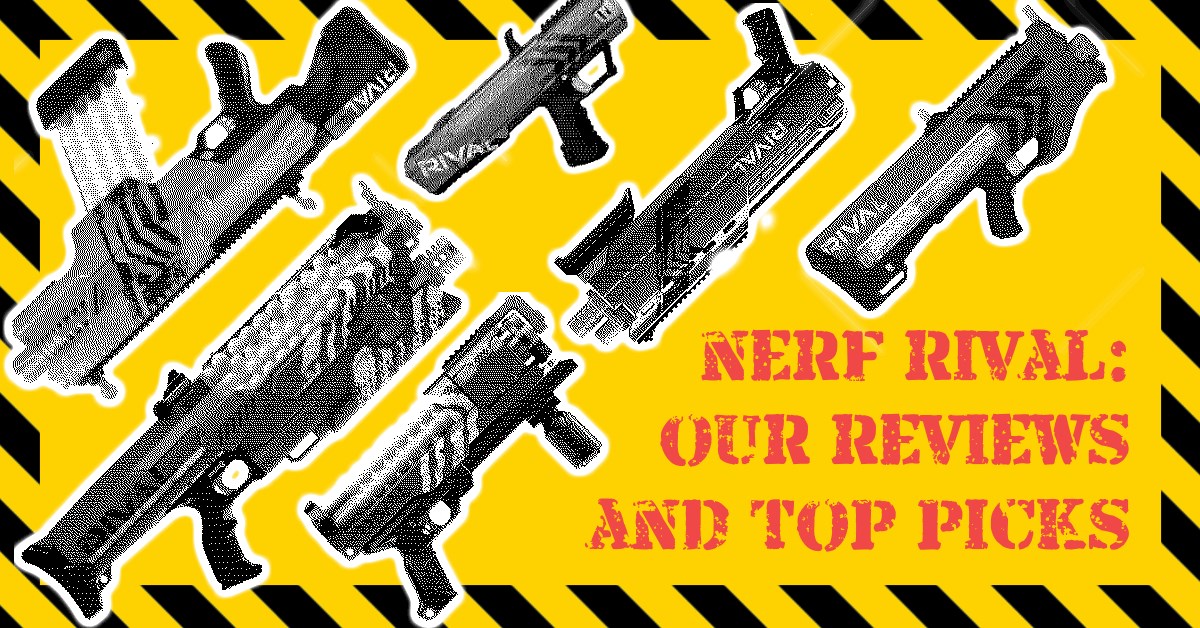 The Best NERF Rival Guns - What are Rival Blasters and Our Top Picks?

The RIVAL series was released in 2015 for, "competitive team-based play", similar to AirSoft

The NERF Rival range fires a different type of ammo, which is why they are sometimes known as the "nerf ball gun that shoots balls" as they use different ammo termed a "High Impact Round".

These High Impact Rounds are spherical and covered in little dimples like a golf ball. This is a huge aerodynamic improvement over the usual NERF darts, so these blasters not only fire harder, they are much more accurate too.

The Rival blasters are all higher powered than anything offered by the N-Strike Elite range (without modification) with muzzle velocities around 100 FPS compared to 70-75 for the Elite blasters.

This means that at close range on bare skin they can sting, but nothing more than that really. However, you should always wear goggles when using any type of NERF gun as a dart in the eye is never a pleasant experience and can be dangerous

All Rival blasters are magazine-fed, although some are built in such as the Artemis and the Nemesis. To further differentiate them from the N-Strike range they have a different accessory rail, designed for the Rival accessories, although you can fit some of the N-Strike accessories with a bit of shoving and swearing.

To emphasize the team play aim of the range, all Rival blasters and accessories come in the choice of either red or blue color schemes.

The Rival range is also the first to come with an interchangeable battery pack. The battery pack is compatible with the Khaos MXVI-4000, Nemesis MXVII-10K and the Hera MXVII-1200. However, the Prometheus and Nerf Rival Zeus rechargeable battery are different.

What is the NERF Rival Age Recommendation?

The NERF Rival range was designed for Nerfers ages 14+, so they are designed with grips and dimensions that fit adult hands much better than the standard NERF guns.

The blasters are all named after Greek deities, eg Artemis, the Goddes of the Hunt.

Following the name comes the optional "M" denoting motorized and then, in a bit of historical ambiguity, each blaster then features Roman numerals to denote the year they were released, eg Khaos MXVI-4000 is Motorized and launched in XVI = 16, so 2016.

The final number the size of the magazine they come with, multiplied by 100, eg Apollo XV-700 comes with a 7 round magazine.

The Perses is the sub-machine gun of the Rival range. However, this means it has less ammo and an 8 round per second rate of fire.

Will this be an issue?

The NERF Rival Zeus is the original semi-automatic blaster in the rival line.

Since then things have moved on, so is the Zeus still worth considering?

Is the NERF Rival Hypnos just a re-modeled Apollo or does it have more to offer?

How does it stack up against the hopper-fed Artemis? Find out here >>

The Nerf Rival Prometheus MXVIII-20K is a monster, featuring a 200 round capacity and a rate of fire of 8 rounds per second

However, it is expensive and features some odd ergonomics, so will this stop it taking Nemesis’ crown?

The NERF Rival Kronos is a spring powered pistol with a five round internal magazine.

This blaster should be the missing piece of the Rival puzzle. But is it any good??

The NERF Rival Nemesis MXVII-10K has replaced the Khaos as the big hitter in the Rival range, and how. Full auto with Rival power and accuracy and a monstrous capacity of 100 rounds through its gravity fed hopper.

On paper it looks like the ultimate NERF gun, but how good is it in reality? Find out here >>

The NERF Rival Apollo XV-700 is the entry level blaster for the Rival range, with some interesting design quirks. But how good is it as a blaster?

Nerf Rival Artemis XVII-3000 was released in early 2017 and is the first in the rival line to feature slam-fire via its innovative revolving barrel. Add to this a 30 round capacity, and it sounds like a winner.

However the magazine is non-removable, so how much of a downside is this in actual gameplay and does it relegate the Artemis to the rank of a gimmick?

The Rival Khaos MXVI-4000 is currently the big hitter in the Rival range, and everything about it screams power – full auto with Rival power and accuracy and a magazine capacity of 40 rounds.

However, weighing in at almost 6 lbs, with those big and unwieldy magazines, just how practical is it in a NERF war?