What is the best Full Auto NERF Machine Gun?

It is not all about blasters, these are the best NERF swords & melee weapons 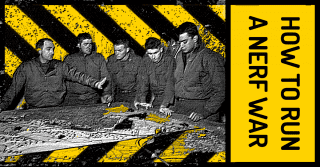 Get started with our guide to NERF War Tactics & Strategies

The best tactics and Strategies for Human Vs Zombies (HvZ)

What is the Best NERF Gun?

A question that comes up a lot is “what are the best NERF guns?” Well the answer is….well, it depends!

Below are our favorite ones for just having fun, but the articles above and below this are there for those of you that want more.

We have linked out to the full reviews of these blasters as well as to Amazon (hover over the Amazon button to get the prices) If you click through to Amazon we may get a commission (it is how we keep the site running!) but it will not affect the price you pay.

Remember we said that the answer to “what is the best NERF gun?” is, “it depends!”? Well the reason depends on what you want your blaster for.

If you play in any NERF wars you will be part of a team and your role will determine what sort of blaster you need – oh and to distinguish NERF guns from real firearms, most people use the term “blaster” and “dart” for bullet regardless of the shape.

OK, but without being too technical if you are going to get stuck into a NERF war you’ll need to understand your role, strategy, and tactics.

Your role is usually driven by the type of NERFer you are, and the type of blasters you have. In NERF wars most players will carry more than one NERF gun; the main one, usually termed a “Primary” (read our guide on Primary NERF Guns here) and a “Secondary”, usually smaller and used as a back-up or for a specific purpose. Some even carry a “Tertiary”, usually a small, single shot pistol, for that last gasp

Of course for some people it is about how much they have to spend, so I have written a guide to my picks for the blasters to buy under $15, under $30 and under $50.

Below is where I go into a bit more detail on why I like those top picks, so for a bit more info, read on

This blaster is an absolute beast! It is fully automatic and fires at over 100FPS with Rival High Impact ammo that are so much more accurate and predictable than N-Strike Elite darts.

If that was not enough it comes with a monstrous 100 round capacity courtesy of a gravity fed hopper. This hopper is what gives the Nemesis the edge over the Khaos and anything else for that matter.

The Nemesis is not only the best blaster in the NERF Rival range, it is simply the best unmodified blaster, full stop!

As with all of the Rival range it is available in red or blue, or if you don’t care, just see which is the cheapest at the time you buy and get that, but whichever you choose, make sure you get one!

Another top pick from the Rival range, this compact little beast also fires the round Rival darts, which are far more accurate than Elite darts and have higher muzzle velocities too.

You can also partially load its 40 dart hopper actually making it more practical than the magazine fed blasters. The priming handle is also much better placed than the Apollo making it my pick of best springer in the Rival range.

All in all this is a really impressive little blaster that packs a remarkably big punch….I love it!

An oldie (in fact it is being discontinued, sadly!) but I use one as my secondary a lot of the time. If you add a stock and a some bigger magazines it makes a really good semi-auto primary too.

Versatile and reliable, it is a classic blaster.

You can read my full review of the N-Strike Elite XD Stryfe here.

This is my fave member of the Zombie Strike line. It is essentially a revolver style NERF blaster with 5 shots in the cylinder. However what makes this blaster cool is that you can prime it with your gun hand – most need to be primed with your other hand. This, along with its size, makes it an ideal secondary blaster.

You can read my full review on the Zombie Strike Hammershot here.